We Are Not Going to Be Intimidated: Undocumented Activist Attends SOTU Despite Threat of Arrest

Home We Are Not Going to Be Intimidated: Undocumented Activist Attends SOTU Despite Threat of Arrest
, January 31, 2018January 31, 2018, Uncategorized, 0 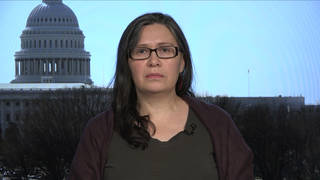 On Tuesday, Republican Rep. Paul Gosar of Arizona asked the U.S. Capitol Police to arrest undocumented immigrants attending President Trump’s State of the Union address. Gosar’s threat didn’t stop many undocumented activists from attending after they were invited by Democratic lawmakers. We speak to Maru Mora Villalpando, an activist and undocumented immigrant with the group Northwest Detention Center Resistance and the group Mijente. She attended the State of the Union as a guest of Washington Senator Maria Cantwell.