Home Scores of Democratic Lawmakers Join GOP to Back Budget Bill with No Protection for DREAMers
, February 9, 2018February 9, 2018, Uncategorized, 0 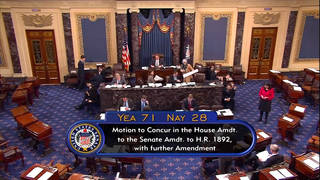 In a pair of early-morning votes, the U.S. House and Senate approved bills to end a brief overnight shutdown of the government. The bill raises military and domestic spending by almost $300 billion over the next two years. But the bill failed to meet the demands of immigrant rights groups—and many Democrats—who wanted protection for young undocumented immigrants whose protections President Trump ended last fall. The House only passed thanks to 73 Democrats who joined Republicans backing the measure. We speak to Greisa Martínez Rosas, advocacy director for United We Dream. She is a recipient of DACA, Deferred Action for Childhood Arrivals.