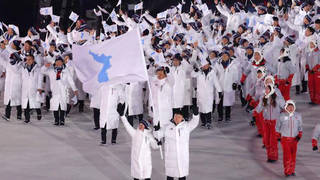 In Pyeongchang, South Korea, the 2018 Winter Olympics have opened, with North and South Korean athletes marching together at the open ceremonies. The games are seen as a pivotal moment for relations between the two countries, who have been officially at war since 1950. In an effort to de-escalate tensions on the Korean Peninsula, North Korea has sent a 500-person delegation of athletes, musicians and performers to the Olympics. North Korean leader Kim Jong-un’s influential sister attended today’s opening ceremony and shook hands with South Korean leader Moon Jae-in; the pair are scheduled to have lunch together. But as the peninsula tries to de-escalate the threat of nuclear war, U.S. Vice President Mike Pence warned the U.S. is slated to impose another round of sanctions against North Korea. We speak to Christine Ahn, the founder and international coordinator of Women Cross DMZ, a global movement of women mobilizing to end the Korean War.