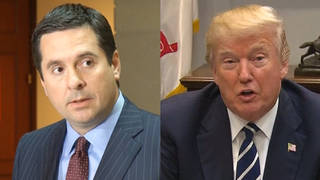 A showdown is brewing in Washington as the White House prepares to release a controversial Republican memo despite opposition from the FBI, the Justice Department and Democratic lawmakers. The four-page memo, written by House Intelligence Committee chair, Republican Congressmember Devin Nunes of California, purports to show that the FBI abused its power when it began surveilling Trump campaign adviser Carter Page in 2016 due to his dealings with Russia. Supporters of President Trump claim the memo offers proof that the FBI’s investigation was tainted by politics from the start, in part because the FBI won approval of the wiretap by citing a dossier funded by supporters of Hillary Clinton. On Wednesday, the FBI, which is led by Trump appointee Christopher Wray, issued an unusual statement criticizing the imminent release of the memo, saying, “[W]e have grave concerns about material omissions of fact that fundamentally impact the memo’s accuracy.” We speak to independent journalist Marcy Wheeler, who runs the website EmptyWheel.net.