Made in the USA: The Real History of the MS-13 Gang Trump Talked About in State of the Union 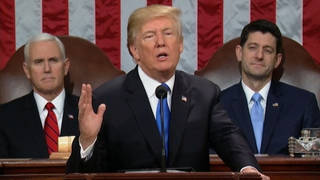 During President Trump’s first State of the Union, he called on Congress to pass an immigration overhaul and repeatedly tried to conflate immigrants, including DREAMers, with terrorists and gang members. Among Trump’s guests to the State of the Union were the parents of two young girls who were killed by members of the MS-13 gang two years ago in Long Island, New York. MS-13 is a gang that originated in Los Angeles in the 1980s and has since spread to Central America as a result of the U.S. mass deportation policies. For more on the history of MS-13 and the United States’ relationship with El Salvador, we speak with Daniel Denvir, writer-in-residence at Harvard Law School’s Fair Punishment Project. His 2017 article for The Washington Post is titled “Deporting people made Central America’s gangs. More deportation won’t help.”