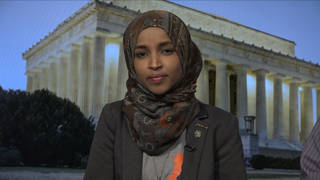 During President Trump’s first State of the Union address Tuesday night, he repeatedly tried to conflate immigrants, including DREAMers, with terrorists and gang members—the latest in a string of racist or xenophobic statements Trump has made throughout his time in office. Yet, on Tuesday night, many lawmakers with the Congressional Black Caucus protested against Trump’s racism—and his recent comments calling African nations “shithole countries”—by wearing traditional African kente cloth. For more on the State of the Union, we speak with Minnesota state Representative Ilhan Omar, the highest-elected Somali-American public official in the United States.