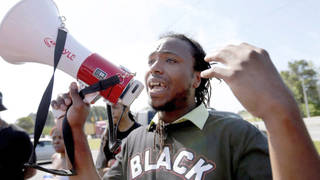 In New Orleans, Black Lives Matter activist and Charleston, South Carolina, community organizer Muhiyidin d’Baha died Tuesday, after he was struck in the thigh by a bullet as he rode his bicycle. Police have not named any motive or suspects in the killing. He made national headlines last year after he appeared in a viral video that shows him leaping over a police line in an attempt to grab a Confederate flag from a white supremacist at a rally in Charleston. In 2015, Democracy Now! spoke with Muhiyidin d’Baha outside the Emanuel AME Church amid the funerals of nine African-American worshipers who were gunned down by white supremacist Dylann Roof.