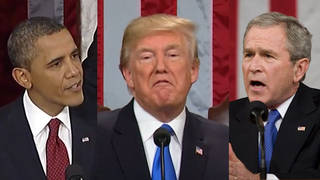 On Tuesday night, President Trump became the third president in a row to attempt to put a positive spin on the war in Afghanistan—the longest war in U.S. history. Five years earlier, President Barack Obama predicted at his 2013 State of the Union that the war would soon be over. And back in 2006, President George W. Bush used his State of the Union to praise Afghanistan for building a “new democracy.” More than 16 years after the U.S. War in Afghanistan began, the country remains in a state of crisis. On Saturday, more than 100 people died in Kabul when an ambulance packed with explosives blew up. Then, on Monday, Islamic State militants carried out an early-morning attack on a military academy in the western outskirts of the capital of Kabul, killing at least 11 troops and wounding 16. We speak to investigative reporter May Jeong in Kabul. Her most recent piece for The Intercept is titled “Losing Sight: A 4-Year-Old Girl Was the Sole Survivor of a U.S. Drone Strike in Afghanistan. Then She Disappeared.”